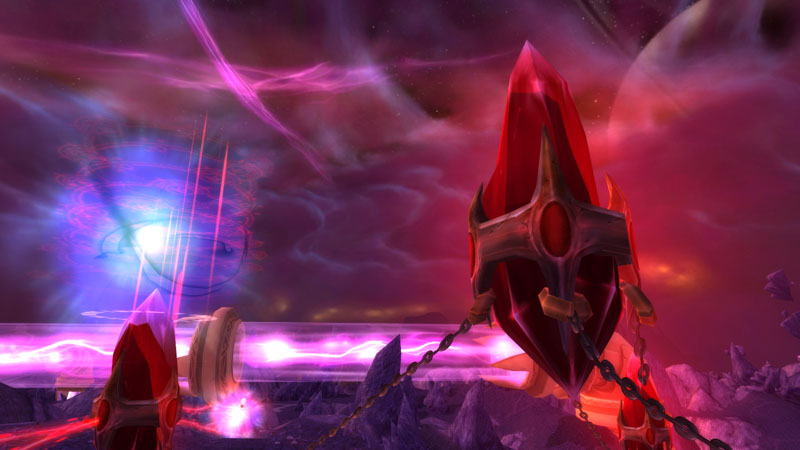 Violent storms had destroyed three ships filled with members of Dezco’s tribe. Friends. Family. When the last remaining vessel made landfall in Pandaria’s sweltering coastal jungle, more death followed. The fact that Leza was pregnant made Dezco increasingly worried about the dire situation. Then, his wife contracted a fever that, despite the tribe’s best efforts, seemed incurable. Through it all, Leza always remained steadfast, a beacon of hope as every Sunwalker strived to be.

“It’s still night,” she’d say, “but the sunrise is near. I can feel it just ahead.”
When she finally went into labor, the strain proved too much for her ailing body. She died weeks before the tribe would ever find the vale, still believing the hardships were almost over. Dezco remembered that dark day with biting clarity: his wife’s last tormented cry as the fever sapped the life from her veins, his failed attempts to spare her from death, and later, the smoke and fire that roiled up from her funeral pyre…
“The Bleeding Sun!” one of the tauren behind Dezco shouted, bringing him back to the present.
Dull light pushed away the darkness, painting the vale in shades of violet and gold. It was the moment before dawn, that fleeting time of the day when An’she, the sun, remained hidden but somehow a glimmer of his light managed to spill across the world.

“Bring the children.” Dezco motioned with his hand, keeping his eyes to the east.
Leza’s cousin, Nala, quietly approached, holding two infant tauren in her arms. Ceremonial feathers and beads dangled from their tiny horns. The first was called Redhorn, and the second, Cloudhoof. Dezco handed the lock of his wife’s mane to Nala and then scooped Leza’s final gifts to him into his arms.
“Begin!” Dezco commanded. Without hesitation, twelve tauren sitting behind him pounded their fists against small leather drums. The beat was quick, a warrior’s heart on the eve of battle.